One of the most important projects of the Department is “Karabournaki: recording the past“, a project that combines the use of several applications (including digitization, data base, 3D , GIS, webpages). The project consist of the digitization and web representation of the univesity excavation that takes place in Karabournaki, under the direction of Dr. E. Manakidou and Dr. D. Tsiafaki. The assemblage of excavation data is presented through texts, photographs and drawings, through the excavation’s logs that were digitalized for this purpose and through a digital database designed for the full documentation of the archaeological findings. At the same time, 3D models of artifacts have been created, while GIS technology is used for the restoration of the excavation site and further investigation of the site’s relation to its surrounding area.

The ancient site of Karabournaki was already known  since the 19th century and the earliest excavation activities took place during WWI. A number of excavations on the ancient settlement site were conducted by the French, British and Russian troops that had camped in Karabournaki during this global conflict (pic. 1, pic.2). A total of 26 graves were excavated by the French soldiers, under the direction of the archaeologist L. Rey (pic. 3, pic. 4, pic. 5). The graves contained funerary offerings  dating to the 6th and 5th century BC. The British discovered three larnaxes, while the Russian soldiers excavated a few more graves. The findings included gold and silver jewelry, weapons of bronze and iron (pic. 7), clay figurines and vessels of clay and bronze (pic.8). A number of artifacts is nowadays kept in the Archaeological Museum of Thessaloniki, while others were transported to Paris and London, where they are kept in the Louvre and the British Museum. There are no known information regarding the Russian findings.

In 1930 K. Romeos, professor of Classical Archaeology of Aristotle University of Thessaloniki,  conducted a brief excavation research on the top of the toumba settlement. The excavation brought to the surface sections of the ancient settlement (storage rooms, parts of houses), along with a great amount of local and imported pottery (from such locations as Attica, Corinth Eastern Greece etc), dating from the 8th to the 5th century BC.

In 1954, during the construction of the modern coastal road that connects Thessaloniki to Nea Krini (Aretsou), a few, very interesting findings were discovered. A bronze hydria of the 5th century BC stands out (pic. 8, pic. 9) , which, as its inscription mentions, was a prize for the victory games founded by the Athenians, celebrating the defeat of the Persians.

The systematic investigation of the site started in 1994. The archaeological research of the toumba was undertaken by the Aristotle University of Thessaloniki, under the direction of prof. M. Tiverios and his associates. Dr. E. Manakidou and  Dr. D. Tsiafaki (pic. 10, pic. 11, pic.12) . After the retirement of prof. M. Tiverios, Prof. E. Manakidou (Aristotle University) and Dr, Despoina Tsiafaki (Director of Research in “Athena” Research Center), undertook the direction of the excavation. The 16th Ephorate of Prehistoric and Classic Antiquities also conducted archaeological research in the area for two years (1994-1995), including excavations in the cemetery area and the neighbouring  table form settlement .

The university’s archaeological research takes place every year during the summer months. The main goal is the education of the students. An average number of fifty (50) undergraduate and ten (10) postgraduate students participate every year in the research (pic. 13, pic. 14, pic. 15, pic. 16-18). Most of the participants are students of the Department of History and Archaeology of the Aristotle Univesity, while some of them are students of other Greek or foreign universities. The former military veterinary building is nowadays used as the main space for the excavation’s activities, such as the classification, recording,  design and photographic documentation of  the findings. The building was given to the university by the government’s Land Agency and was renovated and equipped with funding  by the university and private individuals. In the same space, the students also practice using new technologies (data bases, 3D imaging etc.) developed by “Athena” Research Centre (Xanthi Department) for the needs of the excavation. 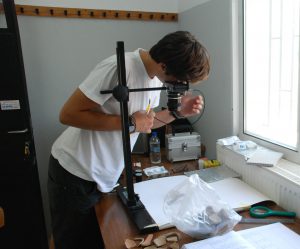 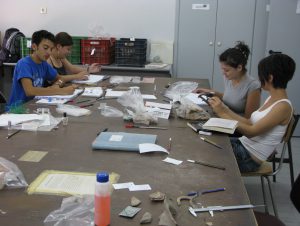 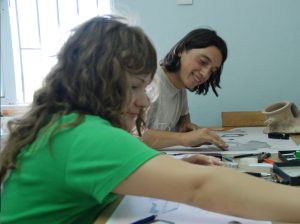 The continuous occupation of the area by the military, combined with the construction of several military buildings, has led to great disruption and destruction  on the site of the ancient settlement (it is worth mentioning that the area was in fact part of a military camp until 1989). The use of the area of the toumba as a burial ground for horses of the Greek cavalry as well as the Equestrian Club of Kalamaria (until 1986) has led to an even further destruction of the site. (pic. 19). A great number of modern day findings that date to the 20th century have been discovered during the excavations (pic. 20).

During ancient times, the settlement activity was probably continuous, from the Late Bronze to the Roman era. The heyday of the settlement can be placed in the Archaic period (7th – 6th century BC). A section of the ancient settlement is nowadays submerged under the sea level. (pic. 21)

The university excavations have mostly unearthed  sections of archaic houses (pic. 22, pic. 23). Their main characteristic is their storage rooms, which hosted a great number of  storage jars (pithoi). Another main characteristic is the the semi subterranean beehive shaped structures (‘yposkapta’) (pic. 25). Great numbers of items of household use and local and imported pottery are usually discovered. The imported pottery comes from the majority of known pottery centers of antiquity (Corinth, Athens, Euboea, Chios and other locations of Eastern Greece). There is also a great number of imported transport amphoras which were used for the transport of oil and wine. The various locations from which these amphoras came from indicates that there was a wide range of contacts between the inhabitants of Karabournaki and the rest of the ancient world.