The ancient settlement located on the top of the mound is excavated in trenches of 4x4m. each. Contemporary disturbancehas cause severe damage to the ancient settlement. Therefore, was decided that a horizontal excavation of the site was a better option in order to reveal the modern disturbance along with the latest chronologically preserved phases of the ancient settlement.
Around 100 trenches have been excavated until now. The excavations have revealed various architectural remains, the majority of which date during the Archaic times whereas there are also remnants from the 20th century military constructions. As for the ancients remains, they are stone foundation walls that formed rectangular rooms. Inside the rooms we found pottery, loom weights and various domestic objects. 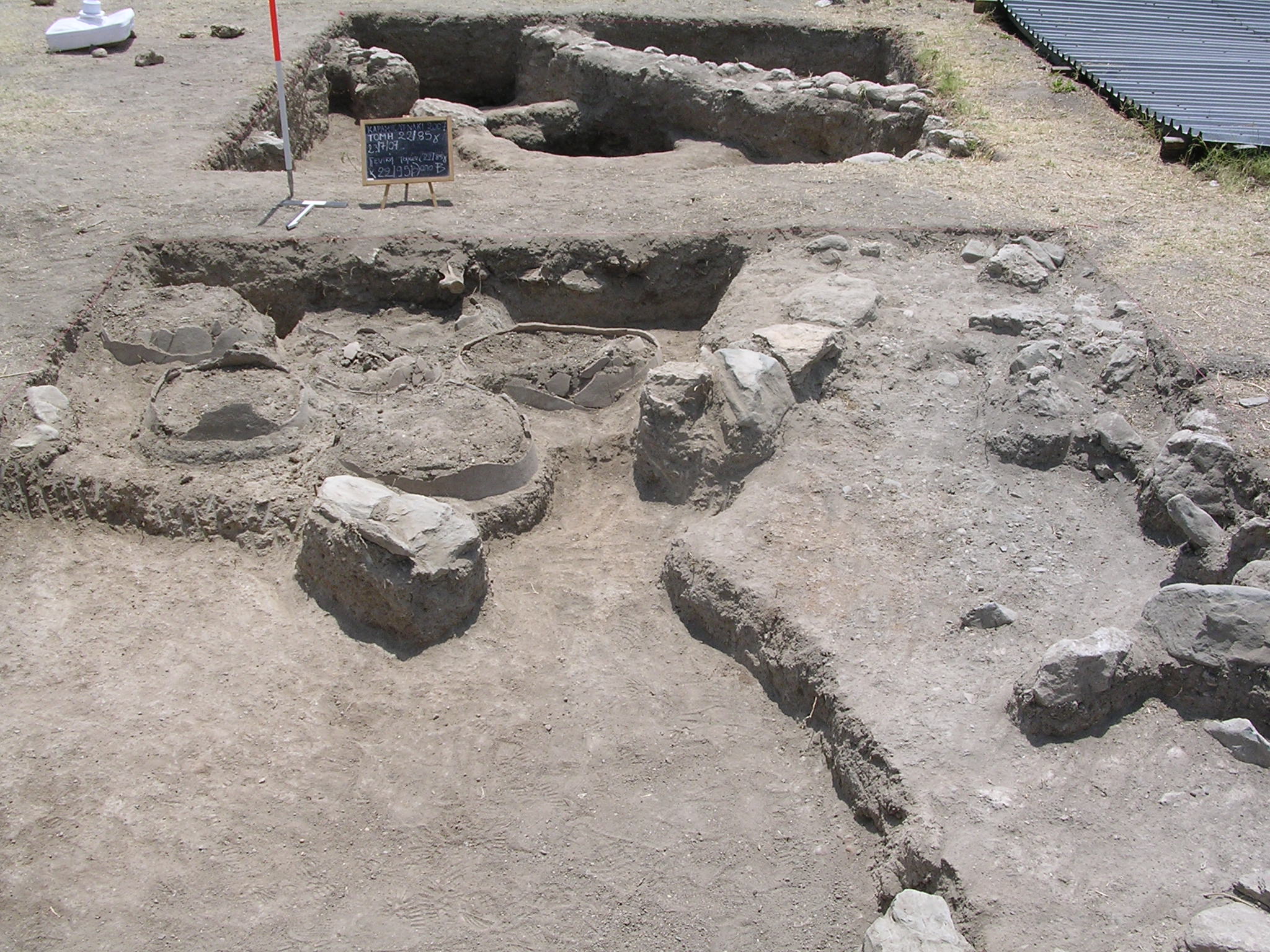 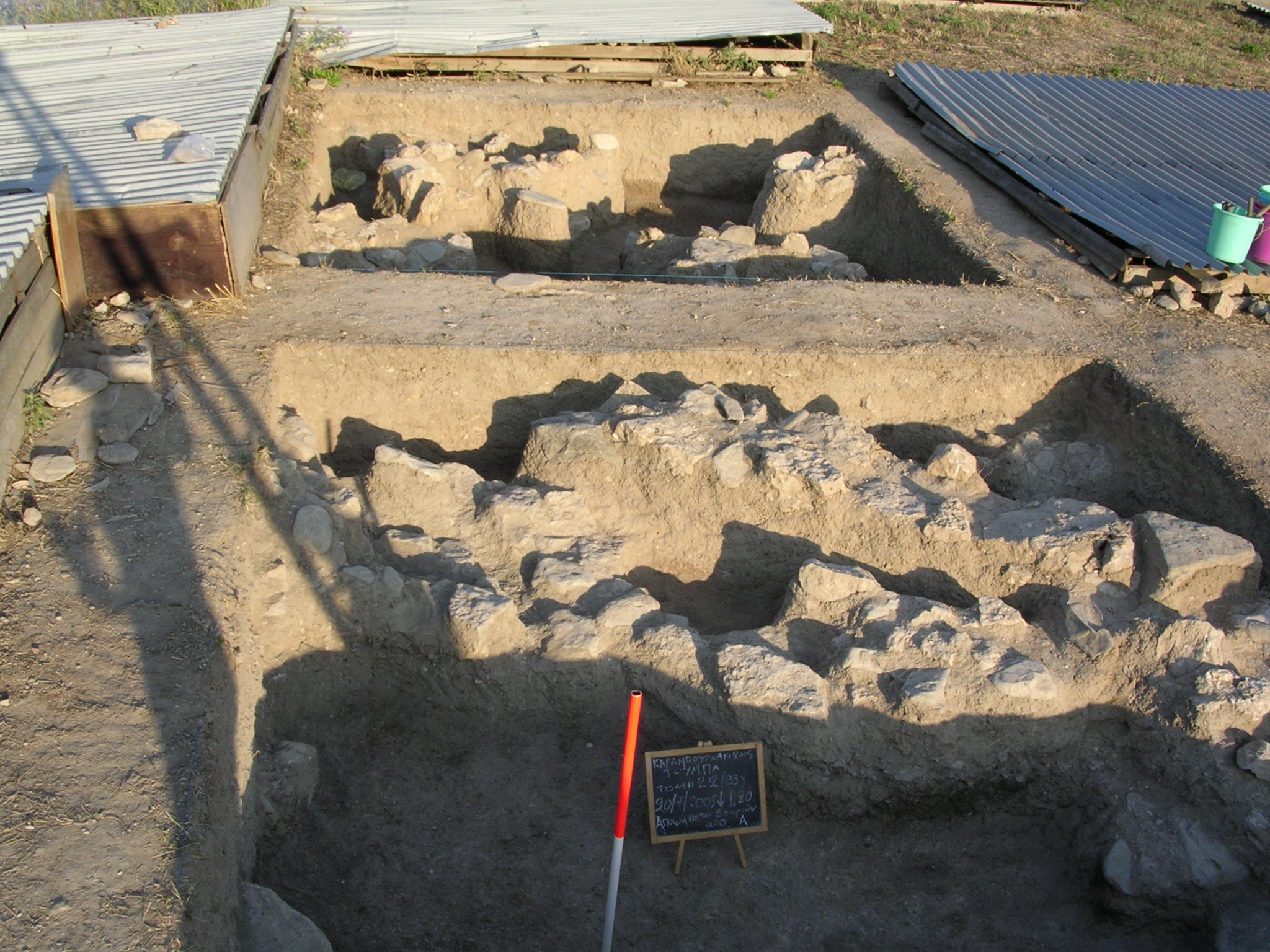 The number and the shape of the preserved structures point to a rather permanent occupation, Buildings are located next to one another while they also appear to follow the same orientation (NW-SE).
The hearths uncovered in some of the trenches prove the cooking activities that had taken place in these spaces and help to identify them as the “kitchen” of the house (optanion). Specific architectural storage features such as “cellars” are a common find in Karabournaki. Over t15 different storerooms preserving pithoi in situ and trade amphorae, can be identified with certainty so far.
The stone pavements, occasionally in circular shape, found in the site would have been used for various domestic needs and activities, whereas others should function as streets. Occasionally in various spots of the excavated area, a type of flooring is revealed, made from seashells and pebbles. The roofs would have been formed by timbers covered with straw or rushes and mud and usually topped by long heavy, baked clay tiles. The most common type of roof tiles found in Karabournaki is the Laconian. Architectural terracottas carrying painted decoration indicate the existence of buildings constructed more carefully than the rest.
The chief attribute of Karabournaki, however, is the beehive-shaped semi-subterranean constructions, spread out on the mound. They pretty much share the same characteristics: a) partially underground and partially built above the ground, b) similar beehive shape with the lower diameter larger than the diameter on the top, c) the upper part was apparently built with stones and mud brick It is not unusual to be found in groups of two, with an opening occasionally that leads from one to another. They are all filled with similar type of earth containing animal, bird, and fish bones, seashells, loom weights, stone axes, various small objects and big quantities of pottery imported and local. It is possible that they were built earlier than the 7th century B.C. They were apparently in existence along to the later Archaic constructions of the site (incorporated to them probably) and they were closed and abandoned altogether as it is shown through the findings inside them.
Pits for rubbish and wasters has been revealed on various spots of the site and they are usually filled with pottery. 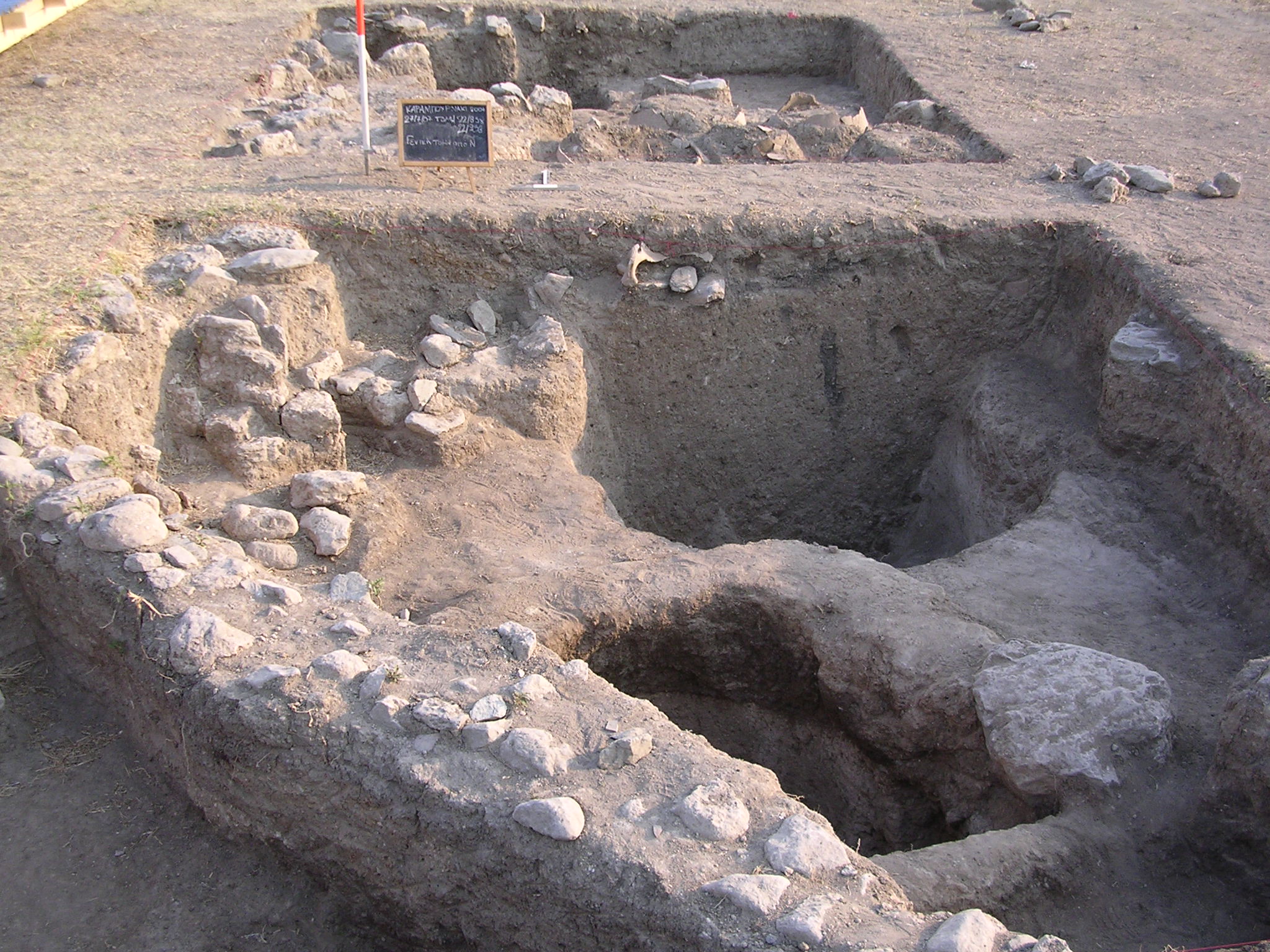 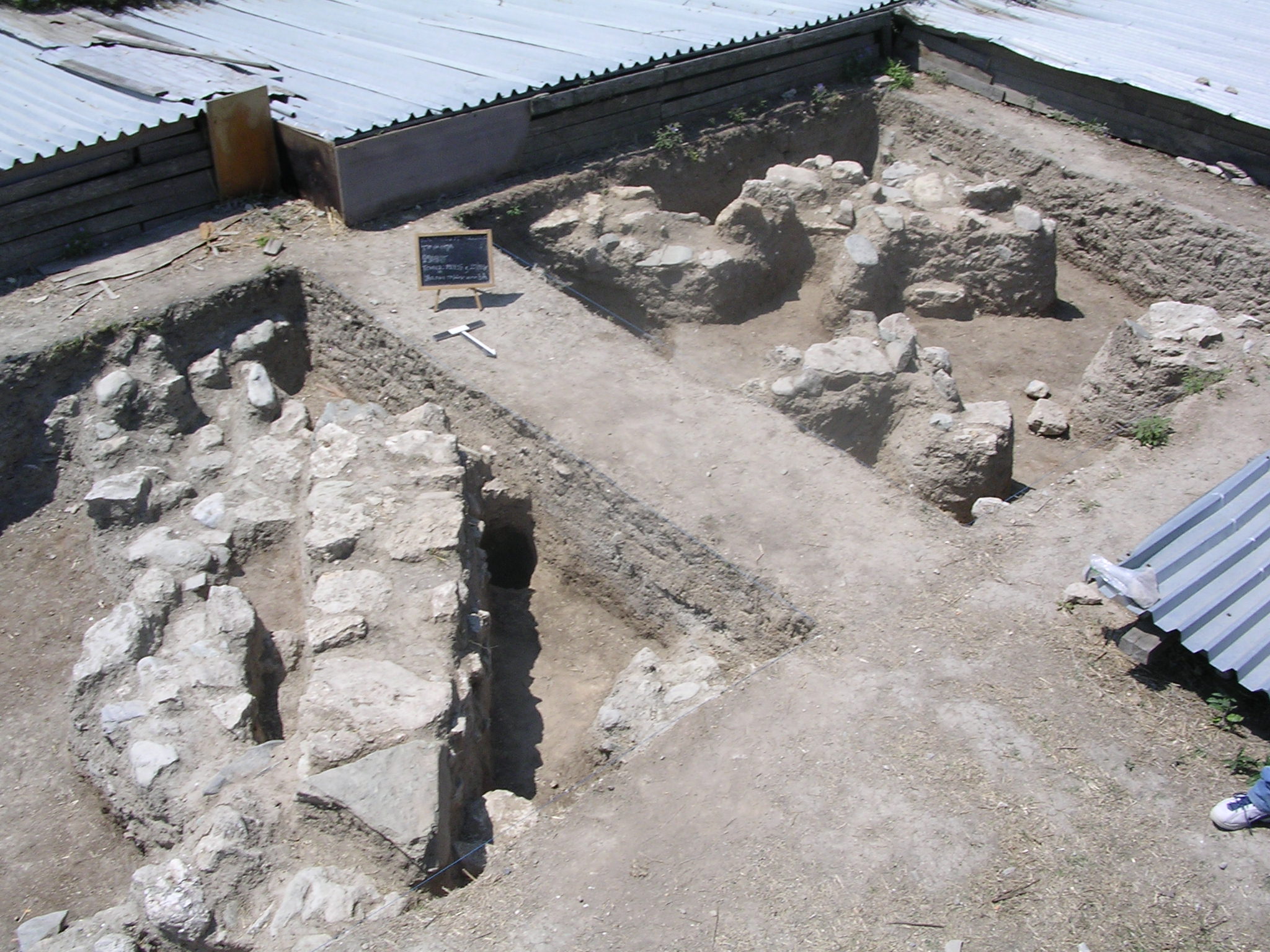 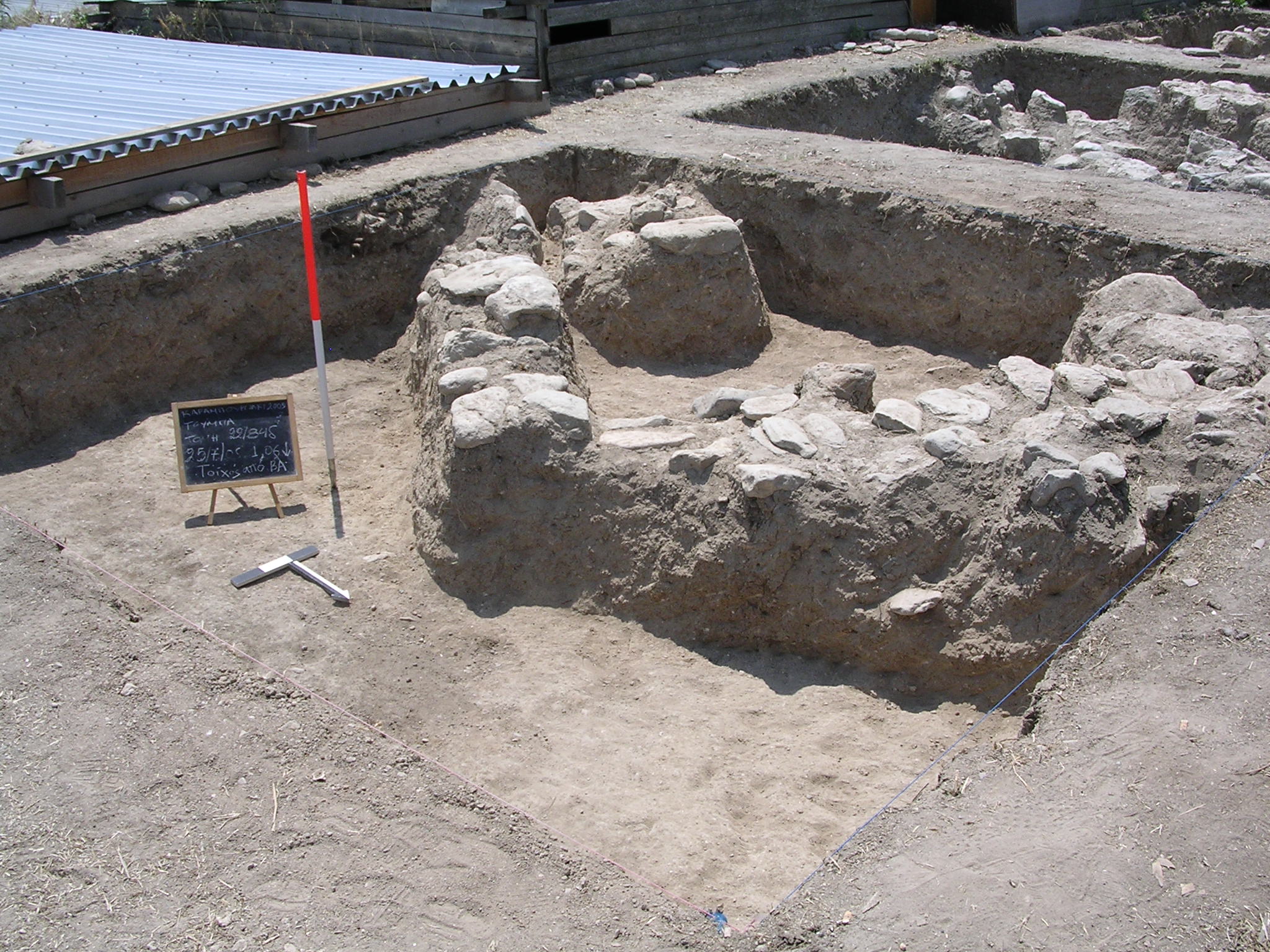